BEST man for the job

…is a woman, actually. We spent a day driving with Laxmi Jadhav, bus driver to the First Lady of Mumbai.

Laxmi Jadhav gets off a bus, freshens up with breakfast and a chat session, and climbs into the driver’s seat of another BEST bus. Her hair is neatly tied; lipstick, nail paint and a bindi with rhinestones – all red like her vehicle – are in place. She’s definitely not the burly, surly man you expect. The 41-year-old is the first female driver employed by the nearly 100-year-old Brihanmumbai Electricity Supply and Transport (BEST) service.

At 9:30am, Jadhav’s shift starts at Dharavi Bus Depot. She is in her khaki uniform from home. She has been up since 5 a.m. finishing the chores in her house in Mulund. Nearly 30 rotis were prepared for his family of five, including two sons (18 and 20), a husband and a mother-in-law. His eldest son is studying engineering, while the youngest is studying commerce.

Jadhav is not only the first female BEST driver, but also the first female car driver in the city to get a license in 2016. As soon as she passed the test, the first thing she did was learn how to about 25 girls that year to drive a car and get their licenses. Jadhav still drives him every day to the bus stop from where she gets on a bus for the drop off. 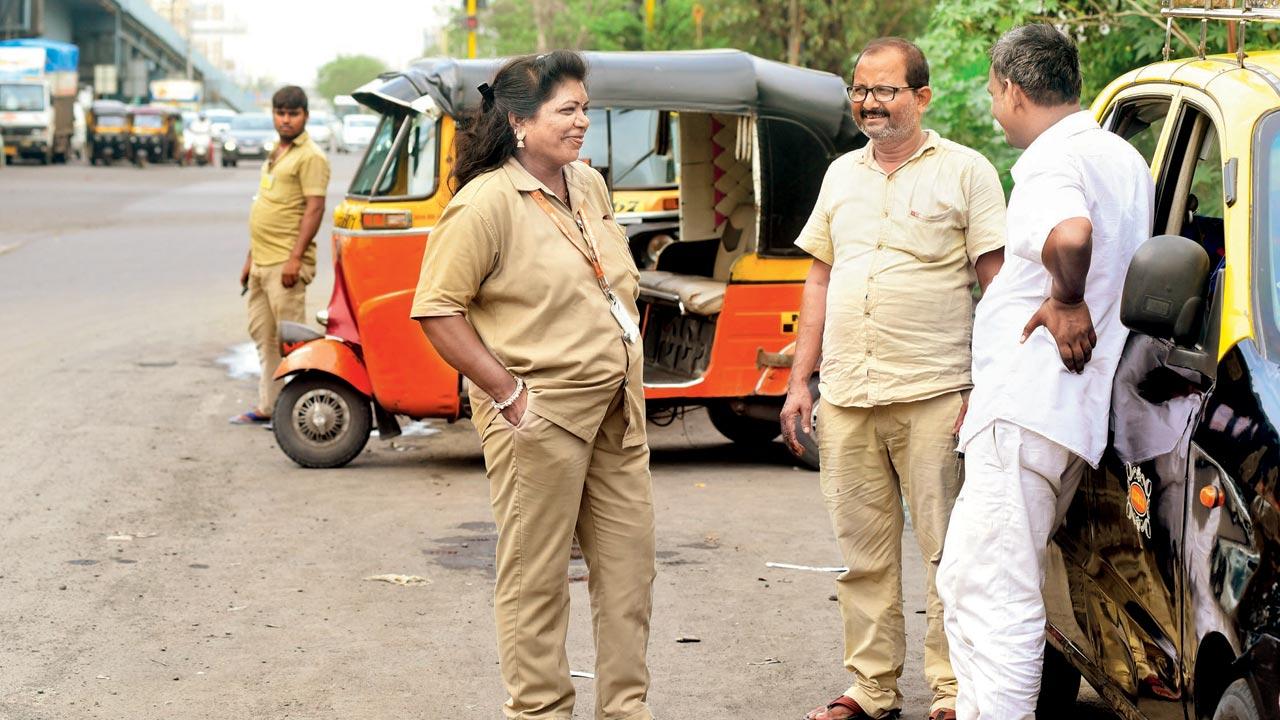 She was also the first woman to get a car license in 2016. Pics/Shadab Khan

“I used to drive a car; but my dream was to be the BEST driver,” she says. “But I didn’t think I would be this famous.” We catch up with her at the Colaba Electric House depot. She is halfway through the two tours she completes daily from Dharavi to Colaba. That day, however, she only made one lap.

Jadhav had to undergo two and a half months of rigorous training at the Dindoshi bus depot, before she could obtain a heavy vehicle driver’s license in 2019. She was tested by various depot officials, and for the final exam, the responsible for all major depots boarded as passengers as she passed through different parts of the city. Finally, June 12 marked his first day as a BEST pilot. Chief Minister Uddhav Thackeray was supposed to inaugurate his maiden voyage, but it was cancelled. She has yet to receive a clarification as she is not a full-time employee of BEST, but was hired by a private company called Mateshwari Urban Transport Solutions.

Such is her devotion to BEST for teaching her to drive and giving her the opportunity to do so, she turned down a job offer from a company as a bus driver at twice the salary. “We have women who are pilots, drivers, cars, cars but not BEST. But now I have accomplished that,” she says jubilantly.

This writer sat on his Route 11 from Colaba to Government Colony in Bandra East. Jadhav had teamed up with a female bus driver, Manisha Munde. Obviously the two work very well together. Jadhav took about two hours to complete the trail, and other than the slight issue she had with turning around in the depot, it was fine. The same cannot be said for people in traffic and some passengers. Jadhav honked his horn a lot to ward off mischievous bikers, pedestrians and cars, as they tested his mettle. Two policemen also boarded the bus and told it to stop halfway, so they could get off. Jadhav refused and they made fun of her being a driver.

She takes him calmly in her stride. “Most people say words of encouragement when they come down,” she says. “When I stop at a signal, women tell me they’re even scared to ride a scooter, let alone a bus. Some people taunt me, but a lot of them praise my driving, click selfies and take videos with me.

The only thing he lacks is music; his car is equipped with a sound system. But she makes up for it by humming while driving the bus. “I really like dancing too,” she says. “In school, I was at the top in kabaddi, kho-kho and cultural functions. If someone asks me to act, I can do it too,” she says.

As we brake for lunch at Dharavi Depot, its popularity is evident. She seems to know everyone, and everyone greets her like an old friend. “It’s hard to manage household chores and work, but it’s my dream. I spent a lot of money training and worked hard to get here,” she said. Her family supports her, as long as she is able to manage her household chores. Although “my sons tell me to wear a T-shirt or a kurta instead of my uniform all the time, but I don’t have time to change,” she says.

As we accompany her to Bhandup, where she has parked her car, she tells us about her driving genes. Her father, brother and uncles are drivers, as is her husband. With a little help from her brother, she drove luxury cars including Mercedes and BMW. Tired, she takes a nap on the way home with the writer sitting next to her – it’s the only sleep she gets all day.

We took another BEST bus from Zion’s depot to where she had parked the car. She quickly wipes it off before picking up a passenger on the way home. “I love the automobile because it gives me my bread and butter,” she says. “But I learn a lot on the bus – about the world, the people, how things work. I hadn’t seen several parts of Mumbai like Mahalaxmi, Mantralaya, Churchgate, but now I can see all of that,” says Jadhav , who grew up in Satara, where she completed Standard X, and came to Mumbai in 2000 after being married.

Once home, she has time until 9 p.m. to freshen up, cook dinner and shop before resuming her driving duty.